I don’t use the word crisis very often, certainly not to describe a transportation problem, but that’s the only applicable word that come to mind, which describe the levels of bike theft plaguing cities today. Long ignored by police and policy makers, the theft of bicycles has now become a common, tolerated, fact of urban life. While great progress has been made in building bicycle lanes, bicycle security has been largely gone unmentioned. No one has tackled the thorny problem that results in many fewer cyclists on the streets and millions in lost property.

While finding reliable research on bike theft can be difficult, seemingly another indication of the degree to which this issue is ignored by public officials, the few available detailed surveys paint a grim picture. Breaking Into Bicycle Theft: Insights From Montreal, Canada, completed by McGill researchers and published in The Journal For Sustainable Transportation, is, by a considerable margin, the best of the available data. The 2014 study takes a close look at the nature and effects of bike theft in one of North America’s most bikable cities, and the results are sobering.

The full study can be found here, but some of the key findings are below:

To appreciate the enormity of these statistics, consider the nation’s largest city:

There were 4,849 bicycles reported stolen in New York in 2014, a 70% rise from the 2,894 that were stolen in 2011. We know however, thanks to the Montreal study, that only about 36% of victims report their bikes stolen*. With some math, we can project that the real number of bikes stolen in New York that year was closer to 13,600. That’s $3.2 million in property if you assume an average cost of $240 per stolen bike. Of this total, only 2.4% or 326 will actually be returned to the original owner.

Of course, given the fact that the number of thefts was rising sharply, it’s likely that these figures were substantially higher in 2015 and 2016. 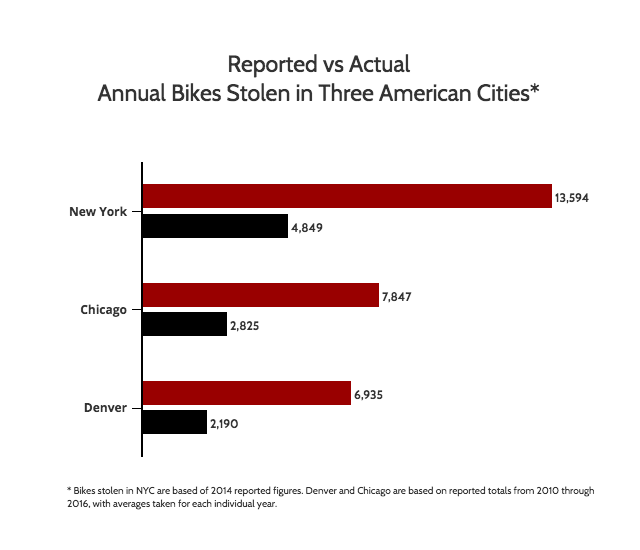 Thanks to the Montreal Survey, we know that a significant portion of cyclists do not replace their bicycle after a theft. In New York, this figure translates into nearly 1000 people in 2014. Over a period of time those “absent cyclists” can really add up. If we assume the same number of thefts from 2014 through 2020, that’s roughly 6000 people that have been taken off the road due to the impact of bike theft.

In fact, I fit into the “absent cyclist” group, myself. After having lost my beloved Jamis Quest Comp to a broad daylight bike thief (my second stolen bike in two years), I opted to save money for a business project instead of immediately purchasing a new roadbike. What was supposed to be a temporary situation has turned into more than a year without using a bicycle in the city, and I’m someone who is most certainly inclined to bike. Even though I want to use a bike to get around, I’ve been kept off the road due to multiple thefts. There are certainly many others like me.

There are also many more who are deterred from frequent cycling due to the fear or the inconvenience generated by the fear of theft. The Montreal researchers relay the story of one woman who, after becoming a victim, relied on draconian measures to keep her ride safe:

One participant claimed that her “last bike was locked to a bike rack outside [her] apartment with a high security U-lock, yet it was stolen overnight. [Now, she is] forced to bring [it] into [her] apartment every night, which is a nuisance

That nuisance, might be enough to stop cyclists from commuting as frequently or all together. Carrying a bicycle down several flights of stairs or through an elevator twice a day may be enough of a barrier to remove all but the most committed from the bike lanes. We must remember that bikes aren’t merely used for commuting, but they’re also used to conduct quick errands and trips; even if these inconveniences cause riders to cycle 20%, that equates to tens of thousands of fewer trips each day in a city like New York,

In fact, according to a 2006 survey from the New York City Planning Commission 50% of non-commuting cyclists rated secure bike storage facilities as a primary factor in their decision not to ride to work or school.

The implications of bike theft on urban transit systems are enormous.

Many cities, including the nation’s largest, have invested in bicycling transport as an efficient and green complement to public transportation systems. Officials have expended considerable public resources on expansive streetscape redesigns to accommodate bicycle lanes, but little thought has been given to secure parking facilities. The result is that many who may be inclined to bike elect to use another mode, often driving.

In fact, according to the 2009 National Household Travel Survey, 43 percent of driving trips are 3 miles or less, and 20 percent are under a mile; perhaps not a efficient use for a car, but an ideal distance for a bicycle.

More than 100 million Americans bike each year, and most want to do it with greater regularity, but few do. Coaxing this population onto the street with improvements to the experience is a key to maximizing return on public infrastructure investments and streamlining urban transportation systems.

It’s not just about getting new people to try out cycling, it’s about convincing those who already ride to ride more often. A superior bike experience, with greater confidence in secure parking options will do just that.

NEXT: Part 2: How Did It Get This Bad, and Why Current Solutions Aren’t Working.

*Assuming that the figures from the Montreal Study hold true in other cities. We have no reason, however, to assume similar conditions would not be true elsewhere

I would be remised if I did not cite the excellent Atlantic article that brought my attention to the Montreal Survey.