Los Angeles, long the poster-child for sprawling low density development, has quietly built a strong case for the country’s leading transit planning city. While no one would dare argue that today’s Los Angeles offers serious competition to the likes of New York, Boston or Washington DC, the city is doing what no one else has been able to: think big and build big.

While New York City contemplates adding another 3 miles of subway lines over the next ten years, and Boston struggles to begin construction of the long awaited Green Line extension, Los Angeles has forged ahead with an ambitious plan to double the size of the region’s fixed-guideway transportation network (Subways, Light Rail, Bus rapid Transit) from 120 miles and 103 stations to 236 miles and 200 stations, an increase of 116 miles.

Yes, LA’s breakneck pace is partially due to the fact that the city just has much catching up to do, the city’s rail ridership figures are only a fraction of East Coast cities, but the scale of which Los Angeles is building is unrivaled by anyone else in America.

Why has Los Angeles been able to build while others can only dream? Here are some reasons:

Large transportation projects, which generally take many years of planning and construction to realize, need local champions to shepherd them through the various layers of the process. Such a sponsor must be willing to expend considerable amounts of political capital, and accept the fact that the project will almost certainly be completed well after they have left office.

Running on a platform heavy on transportation development, Villaraigosa was instrumental in securing dedicated funding for transportation projects.  Villaraigosa then worked to repeal the ban on subway construction in Los Angeles and subsequently to plan the extension of Metro’s Purple line. During his tenure, many large projects were brought off the drawing board and into “shovel ready” status.

Not to be satisfied with even this pace of project financing, Villaraigosa went to Washington with a plan to leverage a federal loan, using local funding sources as collateral, for the purpose of speeding up the pace of transportation projects by making the monies available all at once. The plan eventually passed congress and became a national initiative. 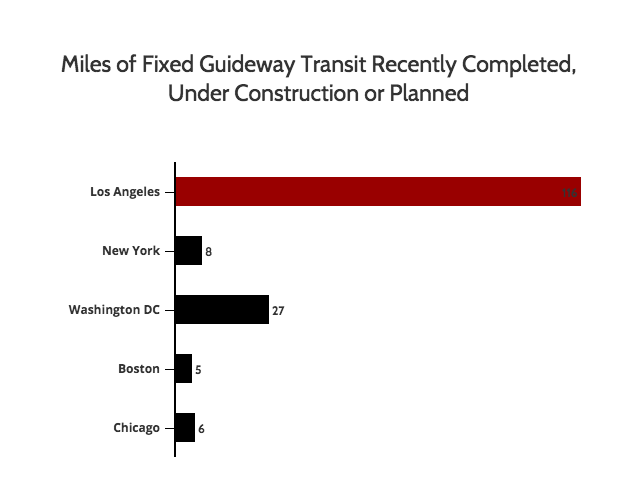 LA has what many other cities could only dream of, a dedicated revenue source that is used for capital projects. Measure R, passed in November 2008, was a half-cent increase in Los Angeles County’s sales tax. The ballot initiative is expected to raise $40 billion over thirty years for transit oriented projects like the Purple Line extension.

The initiative was augmented by another referendum, “Measure M,” which is expected to add $120 Billion to the existing Measure R projections.

Stable, dedicated funding sources are the holy-grail of infrastructure financing. The Los Angeles measures were approved directly by the voters via a referendum, ensuring that transportation revenues are safe from the prying hands of politicians. It means that long term capital projects can be planned en masse instead of piecemeal.

Compared to other large cities, especially those in the East, Los Angeles has an enormous amount autonomy. Los Angeles County enjoys broad powers, it can (via a ballot initiative) impose taxes on itself and, unlike other cities, exercise near complete control over regional transportation.

In fact, the sheer size of Los Angeles County itself allows for simple, streamlined regional transportation planning. The county presides over 4,083 square miles, enough room to fit the entire city of New York and most of its suburbs!

By comparison, planning regional projects in other cities is nightmarish. New York City lays at the nexus of a tri state metropolitan area, with New Jersey only across the river from the city center. Unlike the nation’s second largest city, New York’s transportation agencies are controlled by statehouses; The MTA is dominated by the Governor, and the Port Authority, by the governors of New York and New Jersey, each of whom is mostly impervious to the will of urban voters. New Jersey Transit, which also funnels commuters into the city center, is governed completely by New Jersey, with no formal representation from city leaders.

The city is not able to tax its residents without approval from the state. Mayor Bloomberg’s congestion charging scheme, which would have generated billions for transportation projects, was famously defeated in Albany even though it was approved by New York’s city council.

The situation isn’t much different in Washington DC, where the combination of two states and a federal district create a toxic soup for large regional planning projects.

How Can Other Cities Replicate LA’s Success?

Broadly speaking, cities need to adjust the governance model of local transit agencies so they’re more responsive to local elected leaders. In Los Angeles, regional planning is a local issue,  whereas in New York, good regional planning relies on the benevolence, and competency of two governors. A champion like Villaraigosa was possible in Los Angeles because there was a political reward for good transportation planning. For a mayor of New York or Boston, there is only a political downside in sparring with more powerful governors.

A strong dedicated funding source for capital projects, most likely in the form of a toll or tax, is also critical. Local governance of transportation agencies is useless if there is no funding.

Creating regional transit agencies that are governed by a board of local elected officials, who have the ability, and resources, to plan and execute large scale projects would transform urban landscapes.

Los Angeles will look very different in 2035 than it does today. New neighborhoods, commuting patterns and lifestyles will be possible thanks to today’s bold actions and competent governance. As a result LA will be better positioned to grow and thrive.

Most other cities in America, however, will look the same.

Featured image provided credited to Steve and Julie on Flikr